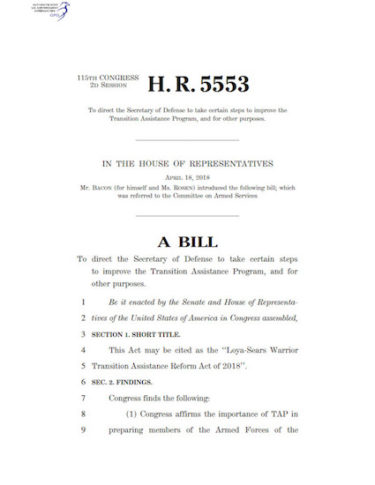 The “Loya-Sears Warrior Transition Assistance Reform Act of 2018” was introduced by Congressman Bacon (R-NE) on April 18, 2018, and requires the Department of Defense (DOD) to provide an action plan to improve the DOD Transition Assistance Program (TAP) by mandating earlier pre-separation counseling, standardizing curriculum, increasing participation rates, and improving transition assistance resources. The bill also requires the development and measurement of long-term metrics to assess outcomes and provide continuous feedback to DOD transition assistance program managers, in coordination with the Department of Veterans Affairs and the Department of Labor. The status of H.R. 5553 can be viewed on Congress.gov.

The unorthodox name of this proposed legislation represents a bridge between what is and what could have been. Sgt. Ryan Loya, a Purple Heart recipient, served ten years Marine Corps infantry. Upon separating in March 2017, he enrolled at NYU and is a Producer at global advertising firm FCB. He will also launch the IPG network’s first Veteran hiring initiative this year. Sgt. Jeremy Sears, who served alongside Ryan, died by suicide after he could not find gainful employment for two years. Both Ryan and Jeremy suffer from combat related PTSD and TBI, yet both have drastically different outcomes.

I. Mandate Eligible Active Duty Servicemembers In All Military Branches To Begin TAP One-Year Prior To Separation:

II. Standardize TAP Across All Military Branches And Installations: